The risk of a deadly disease is ever-present among wild populations, domesticated animals and even humans. It is a powerful ecological force, scientists say, often underestimated and under-researched. 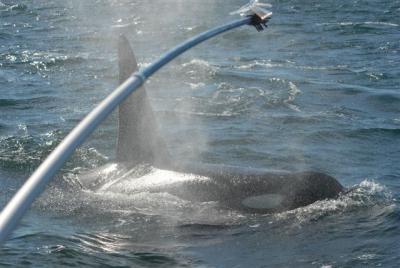 Concerns rise over potential impacts of disease on the ecosystem

From orcas to starfish to humans, disease affects every living creature in the ecosystem. Scientists are increasingly alarmed by its potential to devastate already compromised populations of species in Puget Sound. 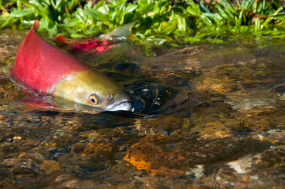 Few environment problems in the Salish Sea have been studied more than the steep decline in salmon populations. But one potential contributor to these declines has gained less attention. Scientists say infectious disease may play a wider role than previously understood. 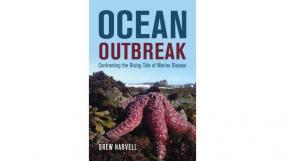 When Cornell University ecologist Drew Harvell wrote her book "Ocean Outbreak," she couldn't have known that 2020 would be the year of COVID-19. But even as people around the world grapple with the effects of that disease, scientists are keeping watch on potential disasters from viruses and other pathogens for species in the world's oceans. As the oceans warm due to climate change, scientists expect incidences of disease to increase in marine ecosystems including the Salish Sea. We asked Harvell about her new book and the need to address this rising challenge.

Researchers studying the killer whales that frequent Puget Sound are growing increasingly concerned that a dangerous virus or other disease-causing organism could spread through the population and hasten extinction of these critically endangered southern resident orcas.

A health check for seabirds

Scientists are still trying to understand what caused the deaths of thousands of rhinoceros auklets in the Salish Sea in 2016. Some studies point to disease as a central factor in that incident and potentially other large seabird die-offs along the coast. That is prompting a deeper look at what makes these birds sick, and how local populations are faring. We followed a group of researchers as they gave a health checkup to a breeding colony of rhinoceros auklets on Protection Island. 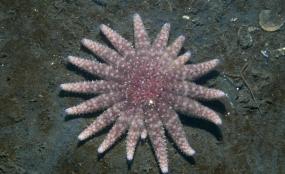 Surveillance for antibiotic-resistant E.coli in the Salish Sea ecosystem

A 2021 study published in the journal Antibiotics suggests that animals may be potential sentinels for antibiotic-resistant and extraintestinal pathogenic E. coli in the Salish Sea ecosystem. 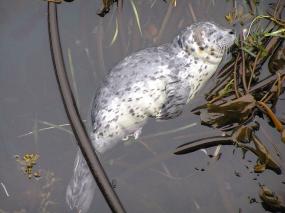 Congenital diseases in harbor seals from the Salish Sea

An article published in the Journal of Wildlife Diseases in 2021 describes trends in birth defects among harbor seals in the Salish Sea from 2003 to 2019. The results suggest a level of congenital disease in this harbor seal population that is important for continued monitoring. 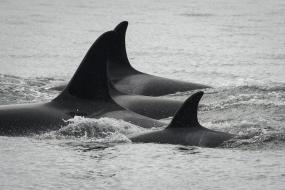 Collisions with boats and other interactions with humans are "significant" causes of death for killer whales in the northeastern Pacific, a recent study says. The findings come from one of the most comprehensive looks at killer whale pathology to date, but scientists say determining how a killer whale may have died is often notoriously difficult. 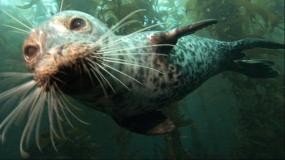 Harbor seals and harbor porpoises in the Salish Sea are showing a relatively high presence of antibiotic-resistant bacteria. A 2021 paper in the journal Oceans suggests that these findings may indicate a wider problem among other species in the region. 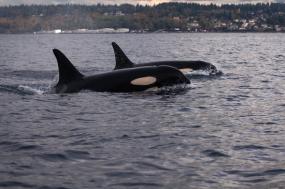 A 2020 study of pathology reports for 53 stranded killer whales in the northeastern Pacific and Hawaii showed that deaths related to human interaction were found in every age class. Vessel strikes accounted for the deaths of four of the nine endangered southern resident killer whales identified in the study. The findings were published Dec. 2 in the journal PLOS ONE.

A 2020 paper published in Frontiers in Marine Science describes details of the fungal disease Mucormycosis which has caused the death of harbor porpoises, harbor seals and one orca in Puget Sound in recent years. The authors discuss the implications for local marine mammals, specifically the endangered southern resident killer whale population. 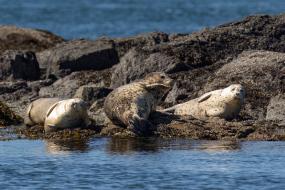 A 2020 article in the journal Frontiers in Marine Science looks at harbor seal stranding and necropsy findings in the San Juan Islands to assess age-related stranding trends and causes of mortality. The harbor seal (Phoca vitulina richardii) population in the Salish Sea has been at equilibrium since the mid-1990s. This stable population of marine mammals resides relatively close to shore near a large human population and offers a novel opportunity to evaluate whether disease acts in a density-dependent manner to limit population growth.

Participants in this year’s Earth Day activities won’t be rallying in large groups, participating in environmental festivals or coming together to clean up the Earth. On the 50th anniversary of Earth Day — April 21st — the environmental movement will be uniquely digital, with many people celebrating from their home computers. [This story is reprinted from the Puget Sound Institute-sponsored blog 'Our Water Ways.'] 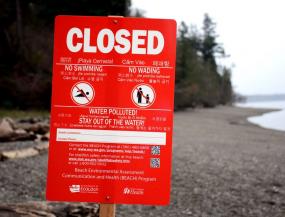 The Pathogens Prevention Reduction and Control agreement between the Environmental Protection Agency and the Washington State Department of Health focuses on the prevention and reduction of pathogen pollution in Puget Sound through the management of human and animal waste. The primary objectives of the agreement include restoring shellfish growing areas, avoiding shellfish closures, and protecting people from disease.

As officials struggle to track and contain the outbreak of the novel coronavirus known as COVID-19, ecologists say widespread impacts from viruses and other pathogens are also a growing threat to the species of the Salish Sea ecosystem. 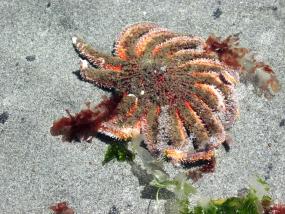 The sunflower sea star (Pycnopodia helianthoides) is highly susceptible to sea star wasting disease. The authors of a 2019 paper published in Science Advances document the rapid, widespread decline of sunflower stars and discuss the ecological implications of losing this important subtidal predator species. 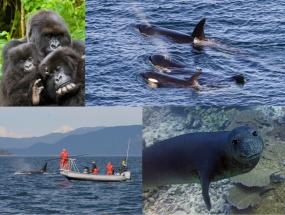 This three-part series explores opportunities and challenges of using medical interventions to save Puget Sound's southern resident orcas from extinction. Part 1 looks at how scientists might treat endangered southern resident orcas that face starvation and risks of disease; Part 2 considers how veterinarians have intervened with other animals in the wild, and how this might apply to orcas in Puget Sound; and Part 3 explores a federally approved vaccination program designed to ward of a deadly virus among endangered Hawaiian monk seals. 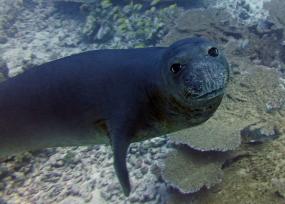 For critically endangered animal populations, experts worry that a highly infectious disease could be the final nail in the coffin, forcing the species into extinction. That’s one reason why federal authorities approved the development and deployment of a new vaccine to ward off the deadly morbillivirus among Hawaiian monk seals. The vaccination program raises the possibility of using vaccines to prevent disease among Puget Sound's southern resident killer whales, but no specific steps have been taken so far.

As the plight of Puget Sound’s southern resident orcas becomes increasingly desperate, with the population dropping from 98 to 75 in just 22 years, scientists are weighing the options of medical intervention. In part two of our two-part series The Orca Docs we look at how veterinarians have intervened with other animals in the wild, and how this might apply to the situation here in Puget Sound. [Part one, "When should medical experts intervene to save a killer whale?" is also available.] 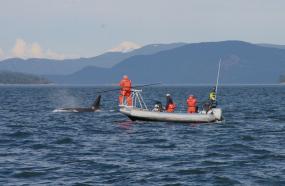 When should medical experts intervene to save a killer whale?

The death of a young female orca in September has sparked a discussion of how and whether scientists should step in with medical care for distressed animals in the wild. Medical intervention has become routine for some endangered mammals, but scientists say Puget Sound’s resident orcas present a series of unique challenges and ethical questions. In part one of our two-part series The Orca Docs we look at how scientists are preparing to treat endangered southern resident orcas that face starvation and risks of disease. 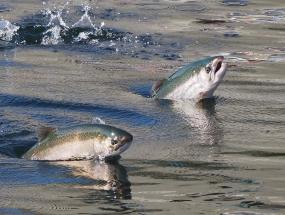 Chemicals, disease and other stressors can increase a salmon's chance of being eaten or reduce its ability to catch food. We wrap up our series on the Salish Sea Marine Survival Project with a look at some of the lesser-known, but still significant factors contributing to salmon declines in the Salish Sea.

Despite WA ban on farmed salmon, BC impacts may flow across border

A report from the Washington State Department of Health outlines results from a series of projects funded by the U.S. Environmental Protection Agency's National Estuary Program in 2011. These projects addressed pathogen pollution in Puget Sound through the management of human and animal waste. Restoring shellfish growing areas, avoiding shellfish closures, and protecting people from disease served as the primary objectives.

A study in the journal PLOS ONE uses volunteer diver surveys to assess the impacts of sea star wasting disease in the Salish Sea. Data shows that sunflower sea stars were especially hard hit and have all but disappeared from the region.

Invasive species are considered a top threat to the balance of ecosystems worldwide. New discoveries of non-native green crabs in Puget Sound have highlighted that concern here at home, but invasive species can impact more than just the food web. Some introduced species can produce toxins that accumulate in shellfish or by directly infecting the human body.

The Puget Sound Ecosystem Monitoring Program released its fifth annual Marine Waters Overview this week. The report provides an assessment of marine conditions for the year 2015 and includes updates on water quality as well as status reports for select plankton, seabirds, fish and marine mammals. 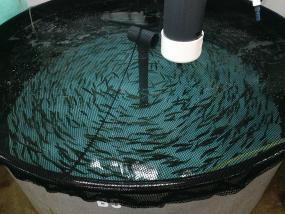 Pacific herring have long been considered an essential part of the Puget Sound food web. Now, studies are beginning to reveal how diseases in herring could be reverberating through the ecosystem, affecting creatures large and small. We continue our coverage of the ecological impacts of disease in Puget Sound with this look at the region's most well-known forage fish. 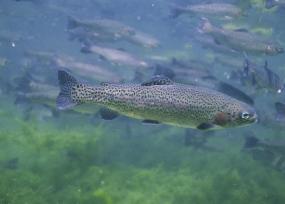 Are diseases playing a role in salmon decline?

Chinook, coho and steelhead populations in Puget Sound have declined dramatically over the past 30 years. In some cases, counts of fish returning to the rivers are just a tenth what they were in the 1980s. While many possible causes of this decline are under consideration, some researchers are focusing on the combined effects of predators and disease. This article continues our coverage of the ecological impacts of disease in Puget Sound. 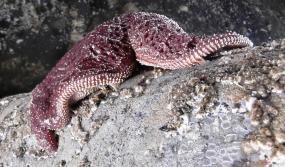 A virus is the likely cause of sea-star die-offs on the Northeast Pacific Coast and in Puget Sound, according to a November 2014 paper published in the Proceedings of the National Academy of Sciences.

A paper in the February 2014 journal Diseases of Aquatic Organisms examines the effect of leaf age on wasting disease in eelgrass across sites in the San Juan Archipelago. Co-author: Encyclopedia of Puget Sound topic editor Joe Gaydos. 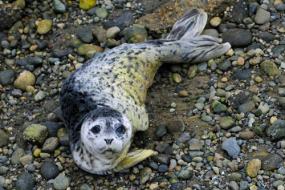 This paper discusses Brucella pinnipedalis infections in harbor seals (Phoca vitulina) in Washington state and transmission to humans and other wildlife. The disease poses a threat to endangered populations and may be exacerbated by organic pollutants.