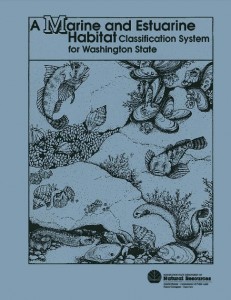 The shoreline classes are derived from the publication “A Marine and Estuarine Habitat Classification System for Washington State” (Dethier, 1990). This classification effort, created for the Washington Natural Heritage Program, had the purpose of providing a system for identifying and describing marine and estuarine areas in a way to allow the eventual selection and ranking of sites for marine preserves. It also was designed to aid in the state’s efforts to create distinctive mapping units for shorelines. It needed to be compatible with National Wetland Inventory maps, and thus to “crosswalk” to the classification scheme of Cowardin et al. (1979). However, the NWI system lacked key parameters necessary for effectively classifying marine and estuarine habitats, especially a way to categorize energy (wave exposure), and a more detailed way of categorizing sediment types than exists in the NWI system. 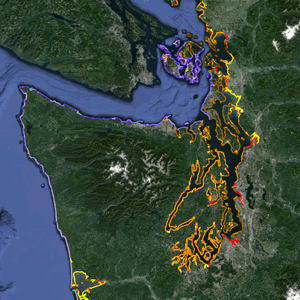 The mapped shoreline classes are derived from the “ShoreZone” project, for which the entire shoreline of Washington state was flown during low tides between 1997 and 1999. Mapping was done from a helicopter, with georeferenced oblique aerial video imaging and synchronous narration of geological and biological features. The aerial imagery was then converted to repeatable classes of data (shore units), including both spatial representation that fixes the information on maps and attribute representation that classifies data into a classification system. Both geological and biological attributes were mapped and classified. The ShoreZone classification system is somewhat different than the system in Dethier (1990), e.g. it differentiates substrates across different zones of the shoreline, has somewhat different definitions of wave exposure and the marine/estuarine boundary, etc. The mapped units here (“Dethier Class”) are a hybrid of these two systems, and as such they match neither classification system perfectly. Thus some sites are considered “estuarine” in one system and “marine” in the other, or be in different wave exposure categories (e.g., semi-exposed vs semi-protected) in the two systems. As in any attempt to force nature into categories, all designations are approximate. Users of the system will undoubtedly find sites that they know well that do not “fit” into the Shore Class assigned.

One of the difficulties in assigning a set of physical descriptors to any piece of shoreline is that even within a small length of beach, the physical environment may differ substantially across the beach face. For example, commonly in Puget Sound the upper and middle beach face is relatively steep and a mix of sand and gravel, but then there is a slope break near the low water mark and sometimes a band of cobble. Classifying such beaches as one substrate type is thus difficult. In general, if Puget Sound beaches have such cobble they will be categorized as “mixed coarse”, i.e. the assigned class tries to account for such important habitat variation.

Many areas in the Salish Sea are difficult to categorize as either Estuarine or Marine. In these transition areas, salinities are generally high (> 25 ppt) and the assemblages resemble those in truly marine waters, but surface salinities occasionally drop lower than this, and circulation and nutrient levels are influenced by estuarine processes. The San Juan Islands fall into this category. Extensive turbulent mixing combined with strong tidal flow from Juan de Fuca Strait generally keep salinities high, but the strong influence of the Fraser River from the north occasionally causes large drops in surface salinities, and areas to the east are influenced by freshwater runoff into Bellingham, Padilla, and Skagit Bays. Rather than rely on a purely salinity-based Marine/ Estuarine cutoff for this area (which would require arbitrary definition not only of a salinity level but also a frequency for this level of intrusion), we have drawn a geographic boundary for this transition through Rosario Strait. Areas to the east of a line from Green Point (Fidalgo Island) to Lawrence Point (Orcas Island) are considered Estuarine, as are all of the Strait of Georgia and the San Juans north of Orcas. Areas to the west are Marine (including islands on both sides of Haro Strait), as is the west side of Whidbey Island down to Admiralty Head. To the east of Deception Pass, and to the south and east of Admiralty Head (and south of Point Wilson on the Quimper Peninsula) is Puget Sound proper, which is considered to be entirely estuarine.

In the “Marine” areas outside this invisible line there clearly exist some estuarine pockets, e.g. Dungeness Bay (Dungeness River) and Sequim Bay (enclosed, with stream input). There is variation in some cases between how this parameter is mapped in ShoreZone vs. the Dethier classification system, e.g. in Westcott Bay on San Juan Island (mapped as estuarine in Shorezone, but considered marine by Dethier because of lack of freshwater input).

In marine and estuarine systems, a limited set of physical parameters – substratum types, wave or current energy, salinity, and depth or elevation – strongly constrain the distributions and interactions of plants and animals. The hierarchy of physical factors used in the mapped shore classes gives a moderate degree of predictive power about the organisms present. Based on this moderate predictability, each shore class has a list of associated plant and/or animal species that could be present. “Diagnostic” species are those that could be considered to be characteristic of a given shore class, i.e. are almost always found in sites of that type. “Common” associates are those organisms often found in such shore types but also seen in other sorts of sites. However, it is important that users realize that actual inventories of organisms at particular beaches around the state are limited; thus finding lists of species for a particular point on a map simply means that the conditions at that site are appropriate for those species, or at least have been in the past. This caveat is especially true for the listed "VEC common associates" (Valued Ecosystem Components) – these are additional species considered “valuable” by the public that could be found in that habitat type, but confidence about their actual presence is low (or otherwise they would already have been listed as 'common'). 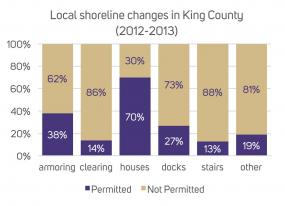 Studies point to gap in permits for shoreline armoring

A significant number of Puget Sound property owners have been altering their shorelines without required permits. A new report suggests that state and local regulators should increase enforcement and make penalties more costly for violators.

The Shoreline Monitoring Toolbox standardizes approaches to tracking the status and health of shoreline environments in Puget Sound. 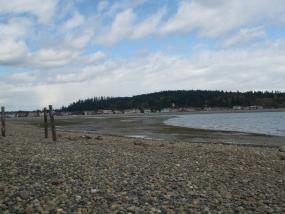 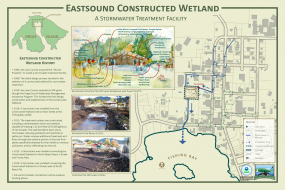 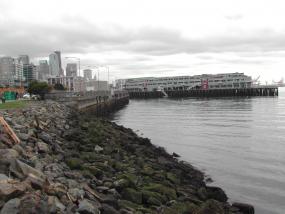 This paper describes a multi-year effort testing whether shoreline enhancements at the Olympic Sculpture Park in Seattle have improved conditions for fish and invertebrates as compared to armored shorelines.