The return of the pig

After an almost complete collapse in the 1970s, harbor porpoise populations in Puget Sound have rebounded. Scientists are celebrating the recovery of the species sometimes known as the "puffing pig."

Early in September of 2005, Dave Anderson and Laurie Shuster were out kayaking in Puget Sound, near Olympia, when they saw a small, gray, blunt-nosed something-or-other swimming off in the distance. It was some kind of dolphin, they figured, but Anderson wasn’t sure of the species. When he got home, his guidebook was pretty straightforward. Small, gray, blunt nose: harbor porpoise.

Anderson at the time was going back to school at Evergreen State College, studying to be a marine biologist. (He had been a computer programmer for years up until then.) The observation stayed on his mind, and months later, when he took a course on marine mammals he mentioned that he had seen a harbor porpoise.

"Are you sure it was a harbor porpoise?," the instructor, John Calambokidis asked him. Calambokidis, who was also the founder of the Cascadia Research Collective, was skeptical. "There aren’t any harbor porpoises in south Puget Sound."

But Anderson was certain that was what he had seen. Later, more reports started to come in of harbor porpoise sightings. The years passed, the sightings piled up, the evidence was becoming irrefutable: after an almost forty-year absence, the harbor porpoise was returning to Puget Sound.

As cetaceans go, the harbor porpoise is fairly nondescript. Its back is dark gray, gradually lightening towards a white belly. Adults may grow up to six feet in length and weigh more than fifty kilograms, or about 120 lbs. (They are usually five feet long and weigh 100 lbs.) They eat cephalopods and forage fish, mostly—smelt, sand lance, herring. They can dive more than two hundred meters deep, but are most often found closer the water’s surface. On the surface they breathe frequently, in loud snorts and grunts. In New England and southeastern Canada, fishers call harbor porpoises the “puffing pig,” presumably out of affection. (“Porpoise” comes from the Latin word porcus, or pig.)

Harbor porpoises live all over the world, from Greenland in the North Atlantic to Florida, and from northern Europe to the waters off west Africa. Along the west coast of North America, they occur from Chukchi Sea to southern California. As a species, they are generally non-migratory; NOAA Fisheries currently recognizes six different management stocks along the U.S. West Coast, according to a 2016 Washington Department of Fish and Wildlife (WDFW) report.

In Puget Sound south of Admiralty Inlet, the harbor porpoise is the smallest of the twenty-two species of cetaceans found. Until fairly recently, it was also one of, if not the, rarest. This wasn’t always so. “Back in the 1940s, they were thought to be the most common cetacean in Washington,” Anderson says. But then they started to disappear. The decline was likely due to two main causes. After the end of World War II, there was a sharp increase in commercial fishing in Puget Sound. With the proliferation of gillnets, bottom set nets, and trawls, harbor porpoises were often caught and drowned.

Second, Puget Sound became increasingly polluted, as industries flourished along its shores and in its watersheds. As top predators, harbor porpoises may have suffered as heavy metals and pesticides accumulated in their bodies, weakening their immune systems and reducing their reproductive success. By the early 1970s, they were almost never seen south of Hood Canal, and only infrequently elsewhere.

Because harbor porpoises were almost never seen, biologists more or less stopped looking for them. For twenty years, a sporadic sighting or two might trickle in, but these were not thought indicative of any larger trends.

Then, in the early 1990s, a biologist named Joe Evenson took over the WDFW’s aerial surveys of marine bird populations. The surveys covered the whole of Puget Sound, from South Puget Sound north to Washington Sound near the U.S.-Canada border, and out to Cape Flattery, in the Strait of Juan de Fuca. Although Evenson’s putative focus was sea ducks, he had experience doing marine mammal counts from years before, with Cascadia. “I thought, Why not also count mammals?” Evenson says. So he did.

Aerial surveys for birds aren’t the same as those dedicated to marine mammals—the planes tend to fly lower, and biologists restrict their observations to narrower bands on either side of the plane—but Evenson and his colleagues counted whatever marine mammals they happened across. Some of those mammals were harbor porpoises. Not many at first, but a gradually growing number as the years went on.

Evenson would offer the dataset to John Calambokidis around the time Anderson was finishing his thesis at Evergreen. Calambokidis asked Anderson to analyze the numbers. When Anderson did, he found that harbor porpoises were increasing in inland Puget Sound at rates beyond what would be predicted from reproduction alone. “The porpoises are coming from somewhere,” Anderson says, “but we don’t know where.”

Still, they are coming. The population is increasing by over eight percent per year in both the Strait of Juan de Fuca and Washington Sound. And from 2000 through 2014, the annual growth rate in south Puget Sound was a whopping 36.8%.

Harbor porpoise in the Salish Sea

Read an in-depth profile of harbor porpoise in the Salish Sea. The report was prepared by the SeaDoc Society for inclusion in the Encyclopedia of Puget Sound.

No one knows precisely why the harbor porpoise’s fortunes seem to have changed. “Fishing regulations have tightened significantly, and the seasons have shortened,” says Evenson. “So bycatch isn’t as big of a problem, although pollution is still a concern.”

The harbor porpoise’s increase also stands opposed to region-wide trends in seabirds and other marine mammals, whose populations are largely either declining or just holding steady. (This is especially true with the Dall’s porpoise, which had moved into Puget Sound in the absence of the harbor porpoise, and has since declined as the harbor porpoise came back.)

As for precisely how many porpoises are in Puget Sound now, Anderson is circumspect. “I try to avoid pushing out abundance numbers,” he says, “but I feel comfortable saying ‘many hundreds,’ probably in the 500s category.” He thinks there might be about four hundred porpoises in south Puget Sound alone.

Both Anderson and Evenson will continue with their surveys and documentation efforts, in spite of a profound lack of funding. After all, in a time when ecological recovery stories are uncommon, the return of a cetacean, even a small, gray snub-nosed one, should be celebrated. “I've found myself as a guest at a wedding on Vashon Island, and people were asking about the porpoise that swam by earlier in the day,” Anderson says. “People are interested, and we need to take time to help them learn more about these interesting animals that are returning to part of their traditional home range.”

The mysterious practice of killing porpoises may have a useful function, but it has yet to be fully explained, according to orca researcher Deborah Giles. 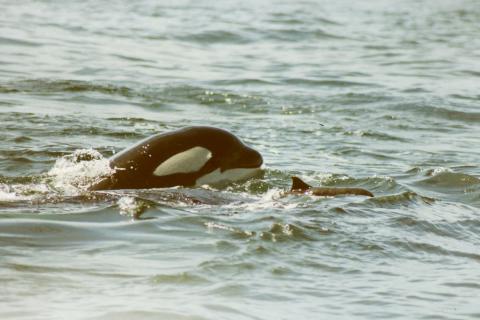 About the Author:
Eric Wagner writes about science and the environment from his home in Seattle, where he lives with his wife and daughter. His writing has appeared in Smithsonian, Orion, and High Country News, among other places, and he is the co-author, with photographer Tom Reese, of the recently published book Once and Future River: Reclaiming the Duwamish. He is currently at work on a book about penguins.
SSEC 2016
Salish Sea Currents