Bull trout appear to be thriving in nearly every section of the Elwha River. Populations there have at least doubled in the years since dam removal, signaling good news for a species that has struggled throughout the West. We bring you part six of our series 'Returning home: The Elwha's genetic legacy.'

If fish could rejoice, you might say that bull trout are celebrating like no other in the removal of the Elwha dams. Not only were bull trout the first of the salmonids to rush upstream after the path was clear, evidence suggests that many of these resourceful fish also have taken advantage of the newly opened route to saltwater.

Overall, studies have shown that the diet of the Elwha bull trout has been enriched with improved access to habitats and a more productive food web. Since dam removal, the bull trout are able to find a greater abundance of prey, including salmon eggs; young Chinook, coho and steelhead; and other fish, such as sculpins and stickleback. This increased food supply, including prey in saltwater, may be credited with a more rapid growth of individual bull trout, averaging 9 percent larger than before dam removal for fish that reach age 3 and 20 percent larger at age 4.

“Of all the Pacific salmonids, bull trout require the coldest, cleanest water,” said Sam Brenkman, chief fisheries biologist for Olympic National Park who has studied the elusive bull trout for more than 20 years. “Bull trout will migrate farther upstream than most species to spawn in the uppermost portions of the watershed, where we have these really cold waters.”

One well-traveled fish wandered 104 miles — more than twice the length of the entire river — during the two-year tracking effort.

Removal of the Elwha dams has opened a migration corridor into pristine spawning habitat high in the Olympic Mountains. This vast upper watershed of the Elwha River is protected within the confines of Olympic National Park. Since dam removal, no fishing has been allowed anywhere on the river. Such conditions provide an opportunity to restore large numbers of bull trout, listed as a threatened species in the lower 48 states.

“I’ve had a keen interest in bull trout since early on in my career,” said Brenkman, who headed up a team that discovered the anadromous (sea-going) nature of bull trout on the Olympic Peninsula in 2005. Until that time, a fair number of experts believed that bull trout stayed in freshwater.

“These fish have a unique life history,” Brenkman said. “They can migrate to the ocean and come back; they can dip into other river systems before returning home to spawn; they can stay in the river or move into lakes.”

Taxonomically, bull trout, Salvelinus confluentus, are in the family Salmonidae, which includes all salmon and most trout. But bull trout are actually a type of char, residing on a branch of the family tree that includes brook trout, Dolly Varden trout and Arctic char.

To track the movement of bull trout in the Elwha after dam removal, Brenkman and his associates imbedded radio transmitters in the bellies of 141 fish starting in 2014. Of those radio-tagged fish, 43 percent initially moved upstream, 39 percent initially moved downstream, and 11 percent stayed near their point of release. The remaining 8 percent could not be relocated.

Of the 78 bull trout tagged below the former Elwha Dam site, 43 moved upstream past that dam site. Of those, 23 continued on past the former Glines Canyon Dam site.

Each year, from 2014 to 2017, tagged fish were detected in areas farther upstream than the year before — with one exception in 2015. In 2014, the fish reached a point 19 miles above the river mouth; in 2016, they reached 32 miles, and in 2017, they reached 40 miles. (In 2015, a rockfall created a partial barrier to migration, reducing the maximum upstream migration to 13 miles before the rocks were blasted away.)

Of the 33 bull trout detected above the Glines Canyon Dam site during the study, 26 reached Rica Canyon at 16 miles upstream of the river mouth; 19 reached the Grand Canyon at 19 miles; 8 reached an unnamed canyon at 27 miles; and 3 went beyond Carlson Canyon at 33 miles to reach the uppermost portion of the watershed.

The study showed a clear pattern of migration: a movement upstream during the summer, downstream into the estuary during the winter or spring, and then upriver again the following summer. One well-traveled fish wandered 104 miles — more than twice the length of the entire river — during the two-year tracking effort.

With greater access to prey up and down the river, as well as in the estuary, Elwha bull trout appear to be growing much faster than before dam removal.

Separate surveys involving snorkel teams before and after dam removal found higher densities of bull trout in nearly every section of the river, with the highest densities of fish shifted upstream. Based on those snorkel surveys, biologists estimated that the total population of Elwha bull trout had grown two to four times within a few years of dam removal.

Besides the end of the dam blockade, researchers pondered why so many bull trout were found upstream after dam removal. One likely reason, they said, is the bull trout’s well-known preference for cold water when it comes time to spawn. Researchers also could not rule out the effect of relocating 82 fish into upstream areas to protect them from an onslaught of sediments trapped behind the dams.

The scientists also studied the diets of the Elwha bull trout by analyzing stomach contents of 58 fish captured in the river and estuary. Smaller fish turned out to be a key part of their diet, accounting for 34 percent of all the prey items. As bull trout grew in size, they were found to consume progressively larger fish, with Pacific salmonids making up 87 percent of the fish eaten. Other prey included a variety of aquatic and terrestrial insects, especially for those bull trout found in the middle and upper reaches of the river.

The Elwha study, like previous studies on the Washington Coast, showed that visits into saltwater are an important part of the life history pattern for bull trout. Bright, silvery colored bull trout — similar to salmon caught in saltwater — were seen in the Elwha River estuary. Other Elwha studies, using stable isotopes to reveal the extent of the diet coming from saltwater, found that marine prey was a significant part of what the adult bull trout were eating.

With greater access to prey up and down the river, as well as in the estuary, Elwha bull trout appear to be growing much faster than before dam removal. Their larger size at spawning benefits the population with an increased number of eggs per female. And larger fish also tend to dig deeper redds, thus protecting the eggs from high-velocity flows.

Genetic tests before dam removal showed that Elwha bull trout were distinct from bull trout from other rivers — but there was little or no genetic difference among bull trout captured below, above or between the two dams. One distinct population, apparently isolated from the others, has been found in the headwaters region of the Elwha River, far above the two dams.

After dam removal, when bull trout moved rapidly upstream, it has become more likely that the lower-river population is mixing with the headwaters population, possibly increasing the overall genetic diversity. That could strengthen the resilience to environmental and climate changes for the population. Furthermore, the movement out to saltwater increases the opportunity for genetic exchange with other populations.

“We don’t know a whole lot about what bull trout do in the ocean, but we think they stay close to shore,” Brenkman said.

Further studies could track the movements of the Elwha fish to determine where they go in the estuary and possibly beyond. Brenkman was involved in a groundbreaking study in 2005 that used radio telemetry and chemical tracers to reveal the movements of bull trout from the Hoh River on the Washington Coast. Some 85 percent of the Hoh fish migrated from freshwater to the ocean at least once, and 75 percent migrated multiple times. The study found that 88 percent  first migrated to sea in their third or fourth year, although some waited until they were 6 years old.

The study also found that even when female bull trout never migrate to the ocean, they can produce ocean-going offspring as well as offspring that remain in freshwater. What triggers the shift to an anadromous form in bull trout remains an open question.

While hatcheries are a fact of life for most salmonid species, bull trout have rarely been grown in confined conditions or moved from one stream to another. They have largely avoided the genetic distortions that such practices can bring to local populations.

“When you study this animal,” Brenkman said, “you are seeing the actions and responses of a truly wild species.”

Up next: Lamprey legacy: Eel-like fish return after dam removal. 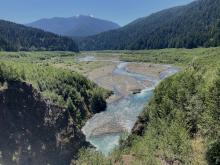 Following dam removal, migratory salmon have been free to swim into the upper Elwha River for the first time in 100 years. Their actual behaviors and reproductive success may well be driven by changes in their genetic makeup. Our seven-part series 'Returning home' examines how the fish are doing and whether the Elwha's genetic legacy remains intact.

Wild steelhead still a force in the Elwha 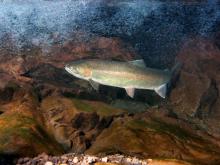 Migration patterns have apparently reawakened for the Elwha River's wild steelhead. Studies show that the fish may have retained much of their genetic drive despite 100 years of being trapped behind dams. We continue our series 'Returning home: The Elwha's genetic legacy' with part two of seven. 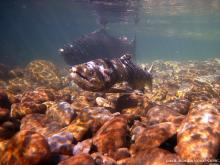 Our series 'Returning home: The Elwha's genetic legacy' continues with a look at the possible return of spring Chinook to the upper portions of the Elwha River. We bring you part three of seven.

The return of sockeye to the Elwha River is intriguing scientists. Could nearby freshwater kokanee help re-establish resident populations? We continue with part four of our series 'Returning home: The Elwha's genetic legacy.'

Opening the door for coho, chum, and pink salmon 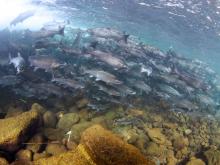 Restoration managers are hopeful that populations of coho, chum and pink salmon will rebound on the Elwha River as the fish take advantage of newly accessible habitat. Part five of our series 'Returning home' examines the importance of genetically distinct salmon runs. 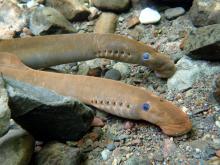 Prehistoric-looking lamprey are recolonizing parts of the Elwha River that they have not occupied for more than 100 years. Like salmon, the culturally and ecologically important fish also move from saltwater into rivers to spawn. And like salmon, lamprey were devastated by the dams that once blocked their way. We conclude our series 'Returning home: The Elwha's genetic legacy.'

About the author: Christopher Dunagan is a senior writer at the Puget Sound Institute.