As tides fall and mudflats are exposed in the Salish Sea, you can glimpse a puzzle that has left scientists and policy makers perplexed. In healthy environments, mats of green eelgrass will often stretch across the shallows, providing vital but fragile habitat for all manner of nearshore species, from Dungeness crabs to salmon. The aquatic plant is considered a fundamental link in the food chain, creating nursery habitat for young fish, stabilizing sediment, and filtering water. It can also inexplicably decline and rebound through space and time.

Scientists are looking at a variety of factors for these changes as they work toward a state goal of expanding eelgrass populations by 20% in Puget Sound. Among their concerns is eelgrass (or seagrass) wasting disease, a disease that leaves eelgrass blades covered in lesions and has triggered historical, devastating die-offs along eastern US and European coasts.

Olivia Graham, a PhD student at Cornell University presented new findings on potential connections between climate change and eelgrass wasting disease in the Salish Sea. Her studies, presented last month at the 2018 Salish Sea Ecosystem Conference in Seattle, involved a novel and literal approach: She dove deeper into the problem.

When Graham first started her graduate research in 2016, there was no published work on wasting disease in seagrasses that looked deeper than the lowest tides. Scientists had only studied disease in intertidal eelgrass exposed at low tide because deeper eelgrass meadows were much harder to get to.

Graham and her colleagues took up the challenge and began scuba diving in eelgrass habitat in deeper waters where the waves whipped up sediment and clouded visibility. Graham had the “worst dive of [her] life” when she was face-to-face with her dive buddy in False Bay in the San Juan Islands but still couldn’t see her or manage to hold on to her samples or survey equipment. 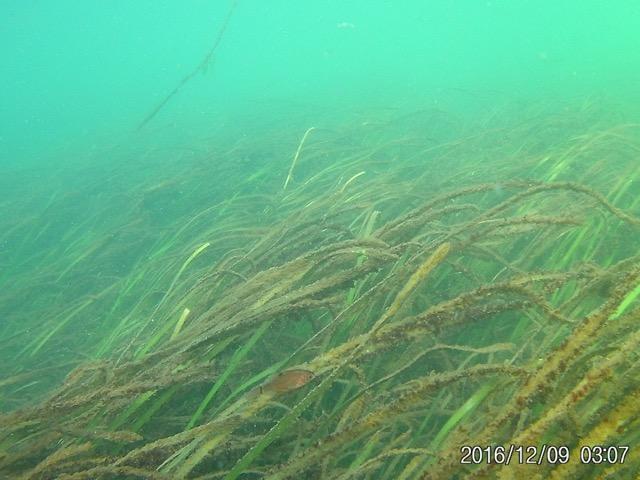 After surveying both subtidal and intertidal eelgrass meadows spanning from Alaska to Puget Sound last summer, Graham found that subtidal eelgrass meadows were less prone to wasting disease than their intertidal counterparts that were left high, dry, and hot during low tides. Her findings suggest that  colder temperatures in deeper water may offer a refuge against disease.

Graham says this partially-assembled puzzle gives us a picture of the future in a warmer ocean that can inform regional planners and eelgrass managers as to which eelgrass meadows are at risk. Graham and her colleagues hope to develop a well-informed model that can predict disease outbreaks based on temperature. This model may be key to developing targeted management plans as ocean temperatures continue to rise and cold-temperature refuges move deeper and deeper away.

About the Author:
Robin McLachlan is a doctoral student at the University of Washington School of Oceanography.
SSEC 2018
Salish Sea Currents