Peering over the railings at Seattle’s downtown waterfront, tourists can often see thousands of young salmon schooling next to shore. These recently hatched Chinook, chum, and pink salmon have just swum into Elliott Bay from the Duwamish River. Millions like them will pass through Puget Sound during the spring and summer as they migrate to habitats in the Salish Sea or to more distant areas throughout the northeast Pacific Ocean.

For these particular salmon, however, the natural, sloping beaches that their ancestors once followed have given way to murky passages through a series of docks and piers.

The salmon move back and forth next to the seawall, staying within a few meters of land. Their movements show a pattern: the fish are not swimming underneath the pier, but are milling about searching for a pathway. Their eyes adjust slowly to darkness, reducing their ability to school, find food, or see predators. They would rather avoid these shaded areas than continue to travel along the seawall.


A threat to young salmon

Overwater structures like piers and seawalls can pose serious challenges to migrating salmon, and Seattle’s downtown waterfront was one of the case studies discussed by scientists at the 2014 Salish Sea Ecosystem Conference in Seattle.

The salmon in Elliott Bay will eventually make it past the seawall, but their lag at the waterfront may threaten their survival to adulthood. Salmon migrations are complex and have evolved to coincide with blooms of prey at locations sometimes hundreds of miles away. Even a subtle delay can make salmon dangerously late to the table, causing them to miss out on crucial calories needed for growth and survival.

Meanwhile, the food along the seawall itself is different than in pristine areas. The salmon schooling here are searching for prey that their ancestors were able to find in the shallow sediments of Elliott Bay’s beaches, but after more than a hundred years of shoreline alterations, scientists suspect that much of that food source has disappeared. Other traditional sources of prey such as insects from shoreline vegetation are also harder to find.

While scientists have long suggested that the downtown Seattle waterfront provides impaired habitat for juvenile salmon, major changes to the shoreline were seen as impractical because of the building costs and potential impacts to businesses and tourists. The situation was mostly static until 2001, when a massive 6.8 earthquake forced the issue, causing significant damage to Seattle’s infrastructure, including the downtown seawall.

Originally built with old-growth timber, the seawall had already exceeded its engineered lifetime, and on top of damage from the earthquake, small marine crustaceans known as “gribbles” had made the seawall look—and function—like a leaky sponge. Studies showed that another quake could cause the seawall to fail outright. The city and voters recognized that the structure needed to be rebuilt, providing a rare opportunity to design a waterfront with enhanced habitat for salmon.

With the seawall reconstruction planned several years in advance, a team of researchers at the University of Washington as well as representatives from the City of Seattle, King Conservation District and the federal Sea Grant program began testing experimental enhancements [the author of this article was a member of the University of Washington team as a graduate student researcher].

The pilot studies focused in large part on food and light availability. An artificial habitat bench in front of the existing seawall supported the growth of small invertebrates that salmon like to eat, as did textured panels that protruded from the flat seawall. Glass blocks set into a pier next to the Seattle Aquarium allowed more sunlight to reach beneath the water, opening up potential pathways for salmon. With these and other promising results, the City of Seattle decided to go forward with widespread enhancements to the downtown waterfront habitat as its seawall is reconstructed.

Scientists hope that these enhancements will provide effective tools for improving degraded shallow habitats around the world. It was argued at the Salish Sea Ecosystem Conference that no seawalls last forever, and crumbling shoreline infrastructure provides an opportunity to create more sustainable waterfronts everywhere. That’s the message to the general public as well. Educational opportunities about the effects of shoreline armoring on salmon and other fish will become increasingly available as Seattle’s new, more sustainable waterfront emerges and is seen by millions of visitors annually.

A long history of shoreline armoring

People have used the waterfronts of Puget Sound for millennia and the effect of development is now so widespread that in many cases descriptions of natural conditions are limited to century-old photographs and accounts given by local tribal elders.


In Seattle, shoreline development began to change in the 1850s when European settlement occurred. Industries like timber and mining facilitated the rise of Seattle as a transportation hub and in 1934, the Elliott Bay seawall was completed to facilitate waterfront use and to armor the shoreline from erosion. The seawall replaced Elliott Bay’s beach and mudflat shorelines with wood and dirt and eventually cement, and covered most of the intertidal zone.


The conversion of natural shorelines to armored waterfronts in Elliott Bay, although an extreme example, is representative of shoreline development across similar urban areas in the Puget Sound region. On average, twenty-seven percent of Puget Sound’s shoreline is armored and one mile of new shoreline armoring is installed every year.

Where is Seattle's Elliott Bay seawall?

The Seattle Aquarium is a popular landmark along the seawall.

Shoreline armoring affects more than a quarter of all the shoreline around Puget Sound. 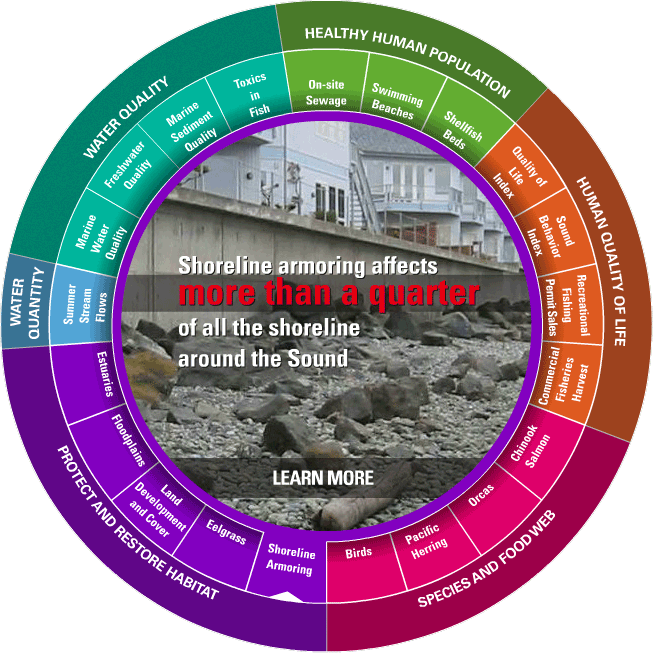 About the Author:
Stuart Munsch is a Ph.D. student at the University of Washington School of Aquatic and Fishery Sciences. He began his graduate program in 2011 and studies effects of shoreline development on fish in Elliott Bay, WA.
SSEC 2014
Salish Sea Currents